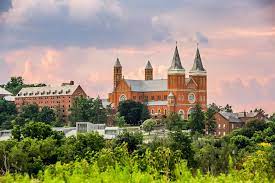 Bradley C. S. Watson was a longtime professor at Saint Vincent’s College, a Catholic college. What he writes at the Spectator should alarm all parents considering Catholic colleges for their children.

A case in point is the institution from which I recently resigned my tenured position: Saint Vincent College. The oldest Benedictine college in the country, it was (until recently) an oasis of relative sanity. In addition to holding an endowed chair in political thought, I was the director of the college’s Center for Political and Economic Thought, a research and public affairs institute dedicated to the scholarly exposition of freedom, Western civilization, and the American experience.

It was one of the oldest collegiate centers of its kind in the nation. In April 2022, one of the center’s speakers (of the hundreds I had invited to campus over 23 years) aroused the ire of the administration. He gave a spirited talk denouncing affirmative action and arguing for the equal treatment of all Americans with respect to both law and cultural expectations.

Saint Vincent thus became a sad exemplar of institutional collapse, demonstrating that craven leadership quickly reveals the hollowness of the whole.
In the days following the speech, the administration promptly lost all semblance of reason.

They apologized for the talk, claimed it was contrary to the Catholic mission of the college, accused the speaker of promoting division and bigotry, and announced the administrative takeover of the center, including an elaborate pre-approval process for all future speakers.

The kinds of speakers and topics that would henceforth be “off limits” at Saint Vincent were apparent to all. The immediate reaction of major Center for Political and Economic Thought donors was to walk away.

It took the administration only hours to cave to the woke mob, which was comprised of a handful of students and alums, an activist board member, and some local agitators. The Foundation for Individual Rights and Expression has referred to the administration’s actions as perhaps “the most extreme example of guest speaker censorship that FIRE has seen in its more than 20-year history.” In June, the organization filed a formal accreditation complaint against the college.

As remarkable as the actions of the administration were, the reactions of the faculty outdid them. It quickly became clear that I would not have a single public ally in pushing back against an administration so obviously bent on undermining academic freedom. Despite a torrent of negative national publicity that would embarrass any serious institution — much less a college representing a religious order that did so much to create and transmit Western civilization — faculty members proved incapable of mustering the courage to make arguments. Saint Vincent thus became a sad exemplar of institutional collapse, demonstrating that craven leadership quickly reveals the hollowness of the whole.

Saint Vincent followed a pattern discernible at other educational institutions that capitulate to the incessant demands of radicals. The faculty tend to divide into three groups: leftists who welcome administrative power when it serves their political ends, those (often in technical disciplines) who simply don’t care enough to rouse themselves because they believe — mistakenly — that questions of intellectual freedom don’t concern them, and those who genuinely worry about administrative despotism and will offer support in private but can’t find the courage to speak publicly. Each new crisis shows that tenure too often creates a sinecure without responsibility; an aristocracy devoid of noblesse oblige.

While many in situations similar to mine face daunting headwinds, I landed on my feet, accepting a position at Hillsdale College’s Van Andel Graduate School of Government in Washington, D.C. In addition to the intellectual virtues, Hillsdale cultivates and exhibits the moral virtue of courage in myriad ways, including making itself home to intellectual refugees like myself. Instead of sympathy, I ask for clear-eyed judgment about the moral collapse of so many of our major institutions. Whenever we have a choice, we must not reward them for their cowardice.

When our apathy meets with their cowardice we see our children losing the faith.