The Choc-acolypse!!! Thousands of Chocolate Bunnies Must be Destroyed, Rules Court. 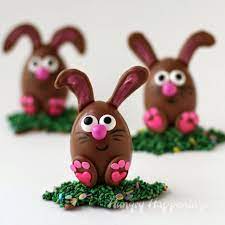 Yahoo: The end is near for chocolate bunnies sold at the German grocery store chain Lidl.

A Swiss federal court has ordered them to be destroyed as a result of a trademark violation, according to a court press release.

The saga dates back to 2018, when Swiss chocolatier Lindt & Sprüngli filed with a commercial court and said Lidl copied its popular, golden-wrapped chocolate bunny candies…

According to Lindt, Lidl’s chocolate bunnies match the shape and features of their own candies, making it hard for customers to distinguish between the two brands.

According to the federal court, there is a risk for confusion between the two candies, even if there are some differences.

Lidl is no longer allowed to sell the rabbit candies and has to destroy any currently existing candy bunnies, the court said.

Couldn’t they just give them away? I have a feeling that when the great chocacolypse occurs, my wife will somehow know it. And shudder.