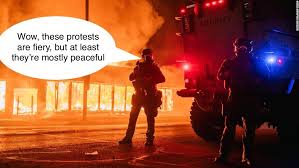 They’re just looking for justice, says the reporter with a flaming car and a smoke filled street in the background.

I sometimes wish these people could see themselves as we see them. Frauds. Propagandists. Liars.

Here we are back again with reporters describing Antifa burning police cars as a "largely peaceful protest".