Mock God and Man at Yale 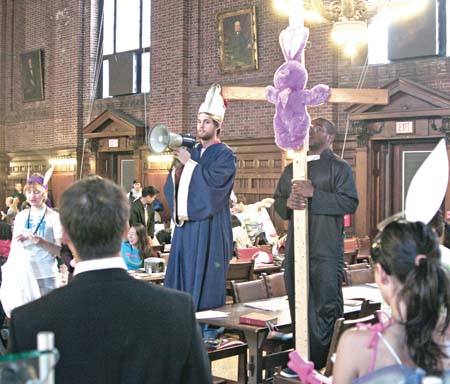 Several months ago I received a letter from Yale University asking me to fill out a questionnaire explaining why I didn’t attend my 15 year reunion since there was a very low turnout from my class. If anyone at the alumni association still wants to know why, the photo at the left tells the story. From the April 12 edition of the Yale Daily News comes this image of a Yale student organization called “The Pundits” dressing like bishops and priests and carrying around a cross with a stuffed animal nailed to it. The location was the Commons, the university’s largest dining hall. The caption for the picture reads: Pundits “brandish a mock crucifix and entertain the crowd in Commons with a zany Easter song.” Would the university tolerate a desecrated Koran? A mock lynching? A trivialized Torah? I suspect not. So all of my mail from the Yale Alumni Association goes even more quickly into the trash. Though I value all that I learned there as a student, Yale isn’t worth supporting or attending if it tolerates behavior like this.