Summorum Pontificum: I May Have to Move to Virginia 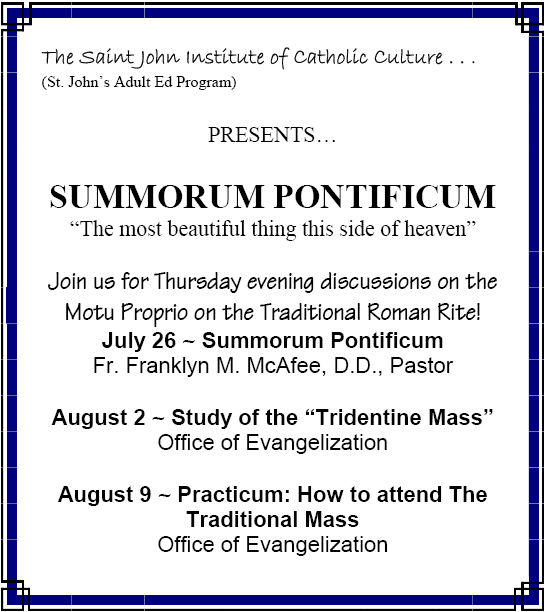 Below is a great example of the Pope’s genius! Allowing individual priests and pastors to make a difference. I have not come across a better example than the Letter from the bulletin of St. John the Beloved in McLean Va. Amazing, simply amazing. I am now considering moving to Virginia just to be in this parish. No pithy comments necessary on this one, it speaks for itself! Thanks to reader Steve for the link!

Despite what the media tells you, the Pope is not renouncing the Second Vatican Council, he is authentically implementing it. He is correcting the mistakes and misinterpretations that came after the Council. One of them is with the return of the Mass. Contrary to what most of the media tells us, Vatican II did not:
1. order Mass to be said in the Vernacular
2. tell priests to face the people at Mass
3. establish Communion in the hand
4. tell people to stand for reception of Communion
The Mass we now say at St. John’s whether in English or Latin came after the Council. The Council ended in 1965, the new order of the Mass came in 1970.

The Church, since the days of Pope St. Pius X, has encouraged actual participation at the Mass. The 1962 missal contains changes that foster that participation, so the charge of the congregation being dumb spectators is not true.

Why was the Motu Propio issued? Pope Benedict, as a Cardinal, wrote extensively on the liturgy and frequently mentioned the suppression of the older form of the Mass by Pope Paul VI when promulgating the new reformed missal of 1970 (the Mass we now celebrate either in English or Latin) after an intervening period of a temporary missal (1965).

He believed and continues to believe that something so ancient (going back 1500 years) and sacred could be forbidden and those who were attached to that form considered, as one author put it, like “the nutty old aunt in the attic”.

The Pope does not question the holiness of the new missal, but he says that the way in which it came about was alien to the Church’s traditions. Many who were enthusiastic about a renewal of the Mass during the years of the Council felt betrayed by the reformed missal of 1970. They claim (as does the Pope) that this was not what the Council had envisioned.

Is the Holy Father leading us backwards? Most people would say no, but I would say yes – in order to lead us forward. He wants to bring the church into contact with that form of the Mass which was the only western liturgy (outside the rite of Milan) that was celebrated during the Second Vatican Council. There was a rupture after Council in the liturgy, the Holy Father wants to go back to heal that break so that the liturgy may continue as a living continuum. That is why he says we need internal reconciliation. The Church has been suffering these past 40 years because of the unintended rupture. The Church must reconcile herself with her own tradition, for that is who she is, it is her own identity.

The missal of Paul VI will benefit from the infusion of sap from the 62 missal and after a reform of the reform be even more resplendent and effective.

I plan on implementing the Motu Propio here at St. John’s but it will not effect a change in anyway in which most of you worship. It allows the former rite for anybody who chooses to attend. The Motu Propio simply allows, it does not impose. What does this mean for St. John’s? The following is my policy for implementation of Summorum Pontificum:

1. the noon Mass, which is now said in Latin according to the missal of Pope Paul VI (1970 – Novus Ordo) will become a Solemn High Mass or High Mass celebrated according to the missal of Blessed John XXIIII (the most ancient rite”). This will occur sometime in early October.
2. I will allow the celebration of all sacraments except Confirmation according to the rite of 1962 if a person requests them. This will also take effect in October.
3. I will allow occasional Masses (wedding anniversaries, etc.) in the 1962 rite for those who request it.
4. I will allow weddings and funerals in the 62 rite for those who request it.
5. I will establish one Mass on a holy day according to the 62 missal; there will still be 4 Masses in the present rite.
6. I will consider another additional Mass on First Fridays after consulting with the pastoral council.
The date given by the Pope for this decree to become law, i.e., go into effect is September 14 of this year. We await further guidance from the bishops on these matters. We also need to buy items unique to those types of Masses; financial donations towards this would be appreciated.

From St. John’s Office of Evangelization . . .

About one week ago, Pope Benedict XVI issued the legal document Summorum Pontificum. This text— which has confirmed the fact that every Roman Catholic priest has the right to celebrate what has been called the “Tridentine Mass”—has caused no little stir among Catholics throughout the world. Often referred to as the “Traditional Mass,” because it has been celebrated without interruption since the earliest days of the Church in Rome, this Mass will be remembered by many of the older faithful of our parishes as the Mass of their childhood. It is this Mass which Pope John Paul II attended as a young man; it is this Mass for which Saint Francis rebuilt his church in Assisi; it is this Mass that Saint Augustine celebrated as Bishop of Hippo; and it is this Mass which has now been restored to the Catholic Church. Over the next few weeks, we will have the opportunity to consider aspects of this restoration in detail. Today, let us focus our attention upon the role of tradition in the lives of faithful Christians.

As many readers may know, the acceptance of “tradition” as a rule of faith within the Catholic Church was rejected by the Protestant reformers as being a non-biblical teaching. This Protestant position, known as sola scriptura, however, is not part of the historic and biblical faith of the True Church. For, as Saint Paul exhorts the faithful of the Catholic community in Thessalonica, “Stand firm and hold fast to the traditions which you were taught” (2 Thess 2:15). And again in his letter to the Corinthians, Saint Paul writes, “I commend you because you remember me in everything and maintain the traditions even as I have delivered them to you” (1 Cor 11:2). This “tradition,” as Saint Paul refers to it, is nothing other than the message of Jesus Christ as it was preached in Jerusalem on Pentecost, and was handed down to the faithful of succeeding generations. As the New Testament was written down over time, part of this tradition was given explicit expression in the form of the Gospels and other writings, while other no less important aspects where handed down verbally from the Apostles to the bishops who succeeded them (cf. 2 Thess 2:15, 2 Tim 2:1). Thus, the Second Vatican Council stated, “In order that the full and living Gospel might always be preserved in the Church, the apostles left bishops as their successors. They gave them ‘their own position of teaching authority’” (DV 7; St. Irenaeus, Adv. Haeres. 3,3,1).

This truth is expressed in Saint Paul’s letter to Timothy where we read, “You then, my son, be strong in the grace that is in Christ Jesus, and what you have heard from me before many witnesses entrust to faithful men who will be able to teach others” (2 Tim 2:1). Thus, this precious jewel of the faith was handed down through the Church’s teaching authority from generation to generation, even to our own day.

Through this tradition “the Church, in her doctrine, life, and worship perpetuates and transmits to every generation all that she herself is, all that she believes” (Dei Verbum 8,1). Please notice that in the above quotation from the Second Vatican Council, “worship” is one of the three ways in which the Church is said to perpetuate and transmit the precious faith which she has received. The way of worship, then, is of great importance, for it is through her worship that the Catholic Church shows forth and announces the faith which she has held from the beginning—“whence the ancient saying “the law of prayer is the law of faith: the Church believes as she prays” (CCC 1124). In other words, the way in which the Catholic Church worships expresses what she believes. Thus, the Catechism of the Catholic Church states, “For this reason no sacramental rite may be modified or manipulated at the will of the minister or the community. Even the supreme authority in the Church may not change the liturgy arbitrarily, but only in obedience of faith and with respect for the mysteries of the liturgy” CCC 1125). Continue next week.