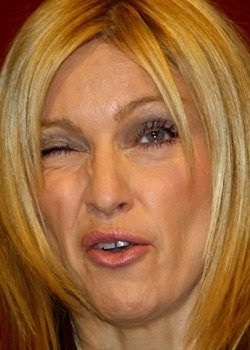 I suppose it was only a matter of time, she has tried everything else.

There is a report out there that the Material Girl has ditched Kaballah for Opus Dei.

FOR the past 15 years, she has been Kabbalah’s most high profile and dedicated follower.

But now Madonna has apparently ditched the controversial faith and taken up with Opus Dei – the secretive Catholic sect made famous in The Da Vinci Code.

The singer is said to be intrigued by the organisation and spent Friday with priests from the centre’s London HQ.

The move follows her alleged falling out with some Kabbalah leaders after reports that cash raised for her Malawi charity was squandered. Last night a source claimed: “She has invested so much into Kabbalah so she was devastated by these damning accusations.

“She has started exploring different religions. Madonna has always been intrigued by Opus Dei. As yet, she’s not a fully paid-up member – she’s just had informal chats.”

Can albino assassins be far behind?

As for the seriousness of this, I will wait and see. Opus Dei could do her a lot of good. I doubt it is serious, but I hope it is true. If she does join, I guess she will have to give away half her wardrobe to a charity for homeless hookers.