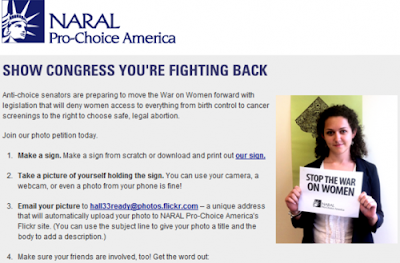 NARAL put out a call for people to send in a pic, a message, a sign of their pro-abort zealotry. They said they wanted to put a face to their cause or some such thing. Here it is:

But it would appear that the awesomely awesome Kathleen Gilbert at LifeSiteNews.com noticed it and let pro-lifers know about the Flickr site that would automatically upload messages and pics. Well, by 4:30 p.m. Kathleen wrote that the site was totally filled with pro-life messages and the poor fools at NARAL were working hard to delete them but they were coming in too fast to prevent them being seen.

Jill Stanek took a snapshot of the site at one point as pro-lifers dominated.

How awesome is that? And here’s the thing -as much fun as it is just to mess with them it’s also about the fact that you never know who’s going to look at it. You never know if your message is going to be the one to turn a heart around. You truly never know.

So if you want to send a message check out LifeSiteNews.com.