Painting of a Surfing Virgin Mary Worth Saving? 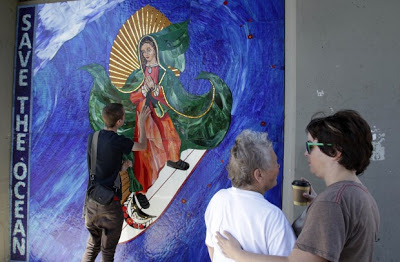 This painting which we’ll call “Our Lady of Hanging Five” was put on a wall illegally. It’s graffiti and it’s just plain ol’ dopey if you ask me. But that hasn’t stopped government officials from spending thousands of dollars in taxpayer money to preserve it.

The surfing Madonna’s beauty is drawing a mass following, and even city officials who say she must go acknowledge they too have been taken by her. They have spent thousands to hire an art conservation agency to find the best way to remove her without causing damage.

Seriously? I guess this passes as religious art for libs.

But think about this -the city is spending money to preserve illegal graffiti? And what happened to the separation of church and state? We have a city spending taxpayer money to preserve “religious art” like this? Call the ACLU! Call Michael Newdow!