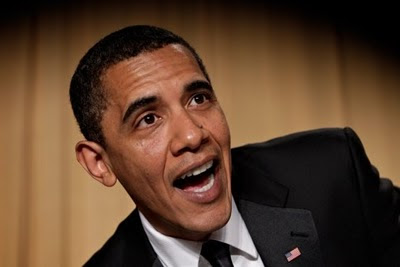 Jews are renowned for having great senses of humor born from tragedy.

So this little humdinger should have had them rolling on the floors.

(Reuters) — President Barack Obama reassured Jewish donors on Monday he strongly supports Israel, stressing close ties between the United States and the Jewish state, but also emphasizing that changes in the Middle East will require a fresh look at the region.

“Both the United States and Israel are going to have to look at this new landscape with fresh eyes. It’s not going to be sufficient for us just to keep on doing the same things,” Obama said at the first of two big-ticket fund-raisers where he was speaking on Monday evening.

He addressed the crowd of about 80 people a month after a speech on the Middle East that exposed a rift between the United States and Israel. At Monday’s dinner, hosted by Americans in Support of a Strong U.S.-Israel Relationship, he said his administration had done more than any for 25 years to support Israel’s security.

Don’t forget to tip your waitress.

Jim Hoft reminds us that,”In May Barack Obama proposed handing over half of Jerusalem, the Wailing Wall, The Temple Mount, Old Jerusalem, and the tomb of Jesus Christ to the Hamas-Fatah terrorist alliance.”

Its funny cause its true. Any more support from Barry and Israel will be a giant hole in the ground.

Maybe Barry wants to tour the Borscht belt in 2013. He will have to do something to support his golf habit.