Government Regs Can Kill You 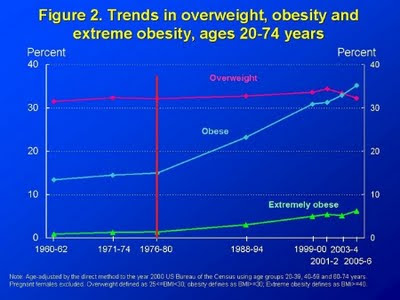 Hey you. You reading this right now. There is a 50% chance that you are a fatty like me. Well, do I have news for you. It is not your fault. It is the fault of government bureaucrats that think, nea insist they know what is best for you based on the science that had all kinds of consensus. That science resulted in a symbol that has likely caused the deaths of millions.

That symbol? The pyramid. The food pyramid.

And the news gets even better. The same non-scientists that insisted that the science was settled are itching to do it again. Think this is my unscientific opinion. Let me quote one of the scientists on the 13 member panel who have come up with the new 2010 dietary guidelines.

“There is no scientific basis for the U.S. Dietary Guidelines….There are no human intervention studies.”

Awesome. Hey since we are talking diet and science and stuff, let’s look at a little chart that shows the rate of obesity since the introduction of that damned food pyramid in 1980.

So to all you fatties out there, know this. You are the vicitm of a well meaning government that is trying to kill you. By deciding that fat was the enemy, they let the real villain in the door. Sugar.

Just one other way the government is trying to kill you through bad science.