Obama On Capitol Christmas Tree, But No Jesus? 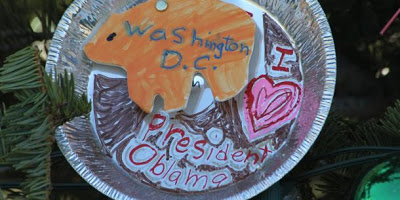 Well I’ve known for a while that some were committed to removing Christ from Christmas. I just didn’t realize they wanted to replace Him with Obama.

Well, I actually kinda’ did. But anyway, this story is a bit of a kick in the pants.

The 63-foot Sierra White Fir lighted at the U.S. Capitol Grounds on Dec. 6 as the official 2011 Capitol Christmas Tree includes a prominently displayed ornament paying homage to President Barack Obama, but includes no ornament readily visible to a person standing near the tree’s base that uses the word “Christmas,” or includes an image of the Nativity, or bears the name or image of Jesus Christ.

On the north side of the tree–at a height of about 4 feet and easily visible to people standing near it—there is an ornament that says: “I ♥ President Obama.”

When asked whether the tree included any ornaments that mention or depict Christmas or the birth of Jesus, the office of the Architect of the Capitol, which is responsible for the tree, told CNSNews.com that it “does not have a policy nor any restrictions concerning the themes for the ornaments” that go on the tree. The office could not say, however, whether or not this year’s Christmas tree does in fact include even a single ornament that directly references or depicts Christmas or Christ.

Wow. Should we even be surprised at this anymore.

Hey, when half the photographers in the media are printing photos of the President with a halo around his head and that loser from Newsweek comparing Obama to God.

The theme, according to the Capitol Christmas Tree website, for this year’s ornaments was “California Shines.”

They recommend ornaments designed to show the rich cultural and ecological diversity of California. Wait. So is it a Christmas tree or an environmentalist shrub? That would be a bit ironic. I mean, hey let’s cut down this tree and make it a celebration of our environmentalism. Does that work?

The thing is that these people will say or do anything -they’ll celebrate idiotic stuff like the “rich cultural and ecological diversity” on Christmas to get around admitting what Christmas is all about.