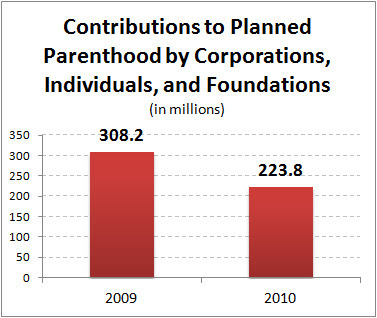 Any time a state seeks to defund Planned Parenthood, the White House absolutely freaks and threatens to remove Medicaid funding to the state’s poor unless they pony up to Big Abortion.

Obviously, Big Abortion needs the money. But according to the latest numbers available at Live Action, Planned Parenthood reported 308 million in private donations from individuals, corporations, and foundations in 2009 but in 2010 they saw that number plummet to 223.8 million.

That’s good news. Now we just need a White House that doesn’t bully states like New Hampshire and Indiana to fund Planned Parenthood and the abortion zealots will have to raise their own money – which it doesn’t look like they’re doing such a good job of.