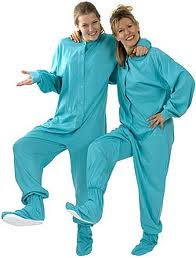 A Democrat commissioner in Louisiana has announced that he’d like to make wearing pajamas outside illegal. And he’s whining that the “moral fiber in our community is dwindling.”

And Commissioner Michael Williams is a believer in the slippery slope because here’s what he said. Honest to goodness, he actually said, “Because its pajama pants today, next it will be underwear tomorrow.”

Seriously? Dude, people have been wearing their pants so low and showing off their Fruit of the Looms for so long, pajamas are an upgrade. Look, I think wearing pajamas outside is pretty much a travesty but illegal?

Now, how much do you wanna’ bet that this Dem who’s all concerned about the “moral fiber” of his community is pro-choice. So outlawing pj’s is good but ripping babies apart is a choice?