Pastor “Sexperiments” with Wife on Roof of Church 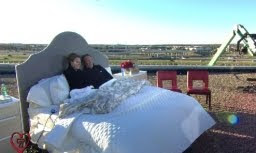 Making me very thankful that Roman Catholic priests don’t marry, a pastor and his wife “sexperimented” on the roof of their Church for 24 hours. And they called the media, of course. I mean, why “sexperiment” if there aren’t cameras and a 24 hour webcast.

Pastor Ed Young and his wife Lisa said they did it (pardon the pun) because they’re determined to articulate God’s plan for sex within the context of marriage.

Hey, what do you call people who make money off what they do in bed? Oh yeah. Paris Hilton.