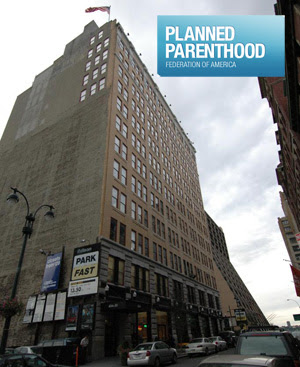 In the past decade, abortion giant Planned Parenthood has received anywhere from $657 million to $2 billion from the federal government. The government is so inefficient and so willing to throw money at Planned Parenthood they can’t even figure out how much of your money has been poured into abortionists’ pockets.

But rest assured, Big Abortion is able to use your money either directly or indiretly and purchase some sweet digs to kick back in. hey, if they’re gonna’ kill babies they might as well be comfortable while doing it. What? Do you want them in the back alley again? Do you know how uncomfortable a back alley is? No ergonomic seats. No view. What, do you think abortionists are savages?

The Planned Parenthood Federation of America, a non-profit organization providing reproductive health and maternal and child health services, has purchased its New York City headquarters — a commercial condo unit at 424 West 33rd Street — for $34.8 million, according to public records filed with the city today.

The healthcare organization, which reportedly signed a 20-year lease for 104,000 square feet at the 200,000-square-foot industrial-turned-office style building in 2002 for rents in the mid-$30s per square foot, bought the commercial condo from Vectra Management Group, a real estate management firm based in New York, which has owned the entire building since 2000.

Nice to know where your money is going, right?