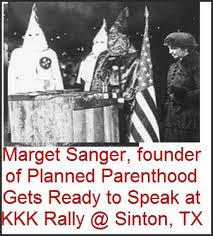 International Planned Parenthood Federation just released a shocking new strategic plan (and by shocking I mean not shocking at all) for the Africa Region for 2010 to 2015 that calls for an 82 percent increase in the number of abortions, according to Life News.
In short, an organization founded by racist Maragret Sanger is calling for fewer black people. Shock! Who’d a thunk it? Sanger’s racist directive to her peeps was, “We don’t want the word to go out that we want to exterminate the Negro population.” Well with this announcement, there goes that, huh?