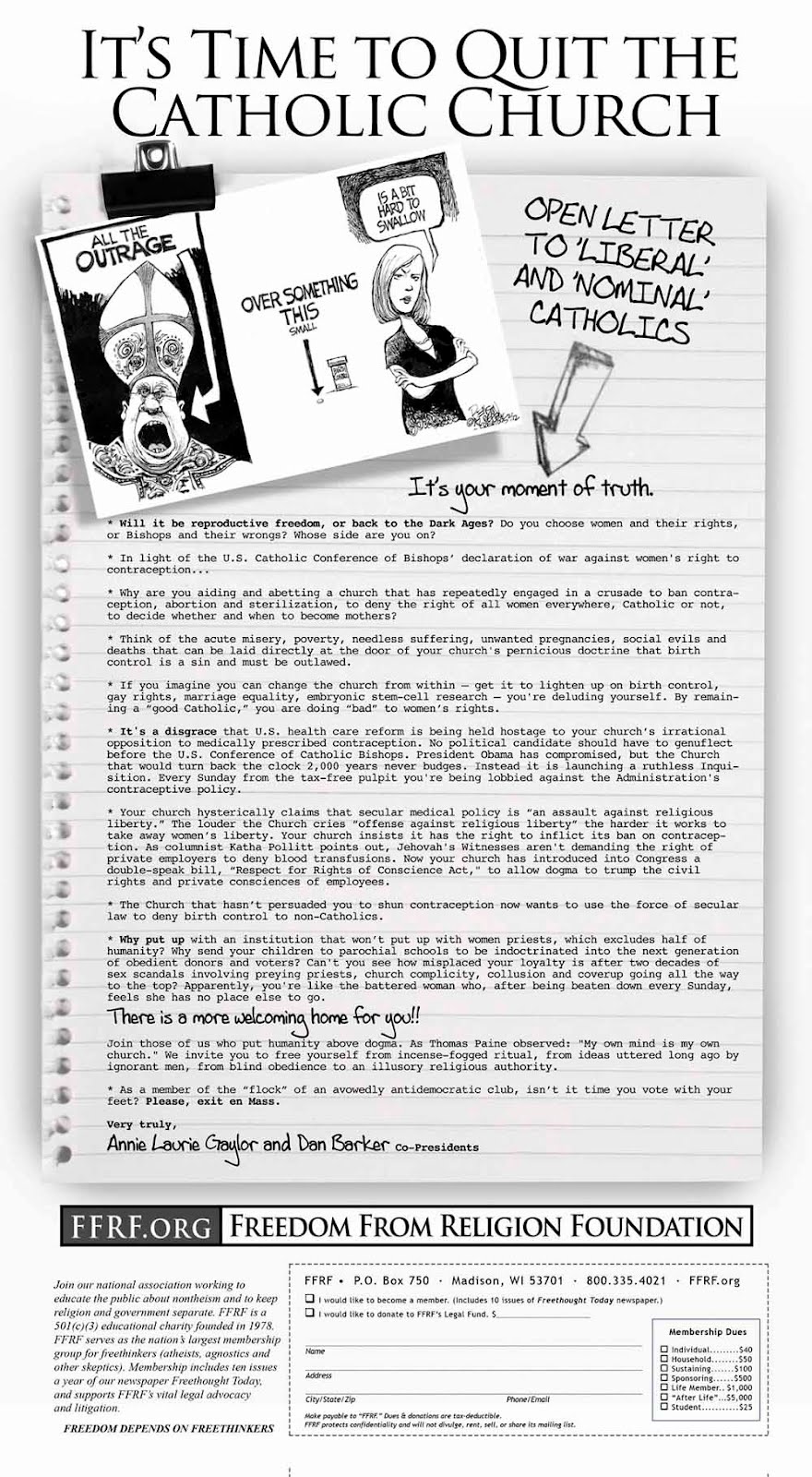 The New York Times published and ad from the Freedom From Religion Foundation which calls for nominal and liberal Catholics to abandon the Church.

The ad asks “Why are you propping up the pillars of a tyrannical and autocratic, woman-hating, sex-perverting, antediluvian Old Boys Club? ” and states “No self-respecting feminist, civil libertarian or progressive should cling to the Catholic faith.” [Full Text Below.]

It goes without saying that the brave brave NYT would never accept and publish an ad criticizing Islam in the same way. But leaving aside the obvious cowardice and their disgraceful perfunctory anti-Catholicism, I think the ad is good. If that is what you believe, get out.

It’s your moment of truth. Will it be reproductive freedom, or back to the Dark Ages? Do you choose women and their rights, or Bishops and their wrongs? Whose side are you on, anyway?

Why are you propping up the pillars of a tyrannical and autocratic, woman-hating, sex-perverting, antediluvian Old Boys Club? Why are you aiding and abetting a church that has repeatedly and publicly announced a crusade to ban contraception, abortion and sterilization, and to deny the right of all women everywhere, Catholic or not, to decide whether and when to become mothers? When it comes to reproductive freedom, the Roman Catholic Church is Public Enemy Number One. Think of the acute misery, poverty, needless suffering, unwanted pregnancies, social evils and deaths that can be laid directly at the door of the Church’s antiquated doctrine that birth control is a sin and must be outlawed.

A backer of the Roman Catholic presidential candidate says that if women want to avoid pregnancy we should put an aspirin between our knees? Catholic politicians are urging that the right to contraception should be left up to states? Nearly 50 years after the Supreme Court upheld contraception as a privacy right, we’re going to have to defend this basic freedom all over again?

You’re better than your church. So why? Why continue to attend Mass? Tithe? Why dutifully sacrifice to send your children to parochial schools so they can be brainwashed into the next generation of myrmidons (and, potentially, become the next Church victims)? For that matter, why have you put up with an institution that won’t put up with women priests, that excludes half of humanity?

No self-respecting feminist, civil libertarian or progressive should cling to the Catholic faith. As a Cafeteria Catholic, you chuck out the stale doctrine and moldy decrees of your religion, but keep patronizing the establishment that menaces public health by serving rotten offerings. Your continuing Catholic membership, as a “liberal,” casts a veneer of respectability upon an irrational sect determined to blow out the Enlightenment and threaten liberty for women worldwide. You are an enabler. And it’s got to stop.

If you imagine you can change the church from within — get it to lighten up on birth control, gay rights, marriage equality, embryonic stem-cell research — you are deluding yourself. If you remain a “good Catholic,” you are doing “bad” to women’s rights. You’re kidding yourself if you think the Church is ever going to add a Doctrine of Immaculate ContraCeption.

It is disgraceful that U.S. health care reform is being held hostage to the Catholic Church’s bizarre opposition to medically prescribed contraception. No politician should jeopardize electability for failure to genuflect before the U.S. Conference of Catholic Bishops. (Question to ask your Bishop: Does he hold up an umbrella against the rain? Isn’t that just as “unnatural” as using a condom or diaphragm?)

Your Church hysterically claims that secular medical policy is “an assault against religious liberty.” You are savvy enough to realize that the real assault is by the Church against women’s rights and health care. As Nation columnist Katha Pollitt asks: Is it an offense against Jehovah Witnesses that health care coverage will include blood transfusions? The Amish, as Pollitt points out, don’t label cars “an assault on religious liberty” and try to force everyone to drive buggies. The louder the Church cries “offense against religious liberty” the harder it works to take away women’s liberty.

Obama has compromised, but the Church never budges, instead launching a vengeful modern-day Inquisition. Look at its continuing directives to parish priests to use their pulpits every Sunday to lobby you against Obama’s policy, the Church’s announcement of a major anti-contraception media campaign — using your tithes, contributions and donations — to defeat Obama’s laudable health care policy. The Church has introduced into Congress the “Respect for Rights of Conscience Act, ” a bill to place the conscienceless Catholic Church’s “rights of conscience” above the rights of conscience of 53 percent of Americans. That the Church has “conscience rights” to deny women their rights is a kissing cousin to the claim that “corporations are people.” The Church that hasn’t persuaded you to oppose contraception now wants to use the force of secular law to deny contraceptive rights to non-Catholics.

But is there any point in going on? After all, your misplaced loyalty has lasted through two decades of public sex scandals involving preying priests, children you may have known as victims, and church complicity, collusion and coverup going all the way to the top. Are you like the battered woman who, after being beaten down every Sunday, feels she has no place else to go?

But we have a more welcoming home to offer, free of incense-fogged ritual, free of what freethinker Bertrand Russell called “ideas uttered long ago by ignorant men,” free of blind obedience to an illusory religious authority. Join those of us who put humanity above dogma.

As a member of the “flock” of an avowedly antidemocratic club, isn’t it time you vote with your feet? Please, exit en Mass.