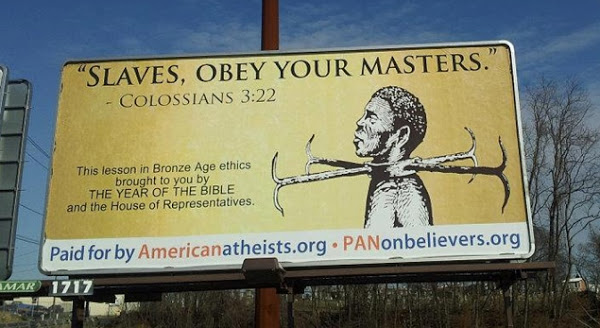 Dear Atheists,
If you are so smart? How ‘come you are so dumb? And racist?

Two atheist groups now believe they made a mistake with a controversial billboard attacking the Bible.

The Pennsylvania sign, which was first vandalized and then taken down, bore a verse from Colossians 3:22: “Slaves, obey your masters.”

While intended as a message against Keystone State legislators who designated 2012 as the “Year of the Bible,” many felt the sign — which also featured a shackled black man — were racist.

The billboard, created and financed by the American Atheists and the Pennsylvania Nonbelievers, went up on Tuesday.

The vandals attacked the sign a day later, and it was gone from an intersection in Harrisburg, Pa., about 24 hours after first appearing.

“I want to say that I’m truly sorry that many people have misunderstood this billboard,” said Pennsylvania Nonbelievers president Brian Fields.

Sorry we misunderstood it? How about sorry you completely misunderstand the bible and in your rush to show how smart you are, all you proved is how dumb you are. But no worries, I am sure natural selection and birth control will rid us of your ilk soon enough.