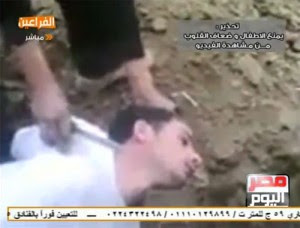 GodReports has this terrible story:

Video footage of a convert from Islam to Christianity being murdered by Muslims has been shown on Egyptian TV, according to the Barnabas Fund.

The graphic incident, which is reported to have taken place in Tunisia, was aired on a program called Egypt Today.

The footage shows a young man being held down by masked men with a knife to his throat. One man chants a number of Muslim prayers in Arabic, mostly condemning Christianity. The man holding the knife to the Christian convert’s throat begins to cut, slowly severing the head amid cries of “Allahu Akbar” (“god is great”).

Please say a prayer for this man, his family and all the Christians in danger because of their belief in Christ.