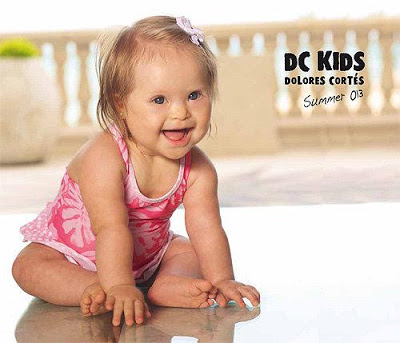 A baby with Down Syndrome is now the face of an international ad campaign for swimwear for a Spanish designer.

The baby is the adorable Valentina Guererro, a 10-month old baby from Miami.

Come on, cute-wise you can’t get much cuter than that.

The designer Dolores Cortes reportedly told Ad Week, “People with Down syndrome are just as beautiful and deserve the same opportunities. I’m thrilled to have Valentina modeling for us.”

According to The Look , Valentina’s mother, a TV host herself Cecelia Elizalde told the Down Syndrome Association of Miami about her thoughts on her daughter being selected:

“I was excited, mainly because the fact that they are placing Valentina on a catalog sends a very clear message of inclusion; all children deserve the same opportunities, regardless of their physical, economic, social, racial or medical condition.”

Cortés has also reportedly pledged to donate 10 percent of the profits from the DC Kids line to the Down Syndrome Association of Miami.

This is a big and wonderful step. Let’s hope to see more like it. I gotta’ tell you this puts me in a good mood for the rest of the day.