How’s That Chick-Fil-A Boycott Coming Along? 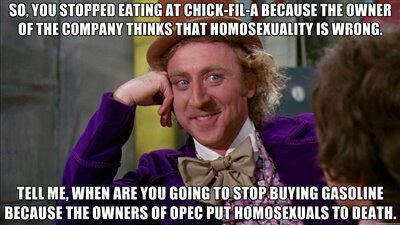 This pic I found at Moonbattery just struck me as hilarious. I’m not sure why Willy Wonka is there but I guess it’s just because Gene Wilder was just so brilliantly sarcastic in that role.

One funny thought keeps occurring to me is that the same people who are outraged that Chick-Fil-A management believe marriage is between a man and a woman all voted for Barack Obama for President in 2008 when he espoused the same exact opinion.

But the left’s reaction to the fast food joint has little to do with gay rights and everything to do with silencing dissent. This reaction along with the media’s help is essentially the head on the pike that tells people “you’re next” if you cross us.

The good news is that the boycott doesn’t seem to be working. I know the Chick-Fil-A near me has been crowded at all hours. I passed by it earlier and the line for the drive-thru was around the building.