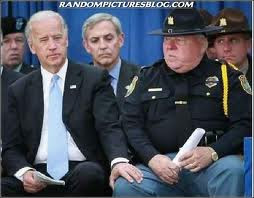 Joe Biden seems to have an amazing talent at attaining impossible standards of ignorance and condescension not really seen outside ABC’s The View. But the fact that Joe Biden does it as a Vice President is truly amazing. Equal parts racist, condescending jerkiness, and asshattery under a hairplugged dome and a false smile, the Vice President has advanced himself remarkably well. These are the seven most hilarious un-photoshopped pictures of Vice President Joe Biden.

Who’d have thought the Vice President would come out for gay marriage just a few short months later?

Biden: “The next Republican that tells me I’m not religious I’m going to shove my rosary beads down their throat.”

When I see an ebullient Biden, I think about the time when David Souter sided with the pro-abortion judges in Planned Parenthood vs. Casey, Biden and Rudman met at the train station by chance. Rudman described it this way:

“At first, I didn’t see Joe; then I spotted him waving at me from far down the platform,” Rudman later recorded in his memoirs, Combat: Twelve Years in the U.S. Senate. “Joe had agonized over his vote for David, and I knew how thrilled he must be. We started running through the crowd toward each other, and when we met, we embraced, laughing and crying.”

An ecstatic Biden wept tears of joy, telling Rudman over and over: “You were right about him [Souter]! … You were right!”

The two men were so jubilant, so giddy-practically dancing-that Rudman said onlookers thought they were crazy: “[B]ut we just kept laughing and yelling and hugging each other because sometimes, there are happy endings.”

Joe Biden in the special built White House playpen to keep him from hurting himself and others. I especially love the looks of the Secret Service.

“I mean, you got the first mainstream African-American who is articulate and bright and clean and a nice-looking guy,” Biden said. “I mean, that’s a storybook, man.”

Bonus Biden. A preview of how Biden will do in his debate with Paul Ryan.