Romney and Ryan Just Have to Act Sane 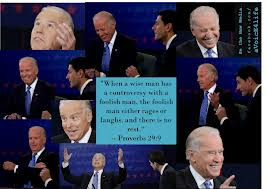 There’s always a lot of talk about likability when it comes to debates and elections overall.

But let me take it one step further. While Romney and Ryan have both done commendable jobs acting like grownups in the debates, the President and the Vice President have both seemed…well… weird. Just weird.

And I think the American people see it. From Biden’s inappropriate laughter, grinning, mugging debate performance to Obama’s sleepy performance in the first debate I think people just saw them as strange.

But last night, was an even stranger Obama performance. The stare. It’s like Obama had pinned his eyelids to his forehead.

This isn’t getting much play and many of the talking heads are talking about Obama winning on points (whatever that means) but I think they’re missing what the American people see. And feel.

The media all said that Biden won the debate with Ryan and polls seemed to indicate that. But what was everyone talking about the next morning. The weirdness of that laugh. And now with Obama’s death stare performance last night I’m pretty sure that’s the talk going on right now. What’s with the death stare?

Romney and Ryan by comparison just have to continue acting sane in comparison.