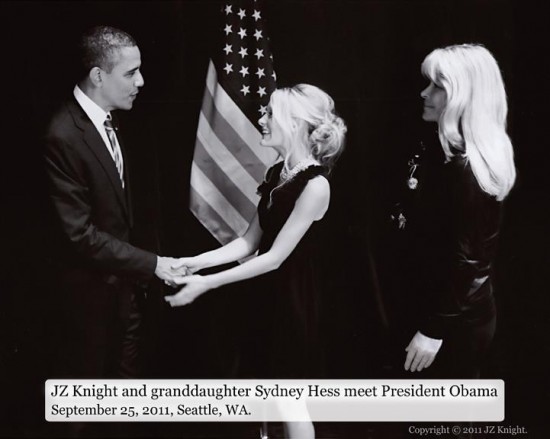 A major Obama donor and donor to the Democrat party (over $120,000 this election cycle) is caught on video saying

“F— you, you Catholics!” Knight bellows over cheers from her audience.

“We will come on you in a terror,” Knight growls in another cut. “We will bring… St. Peter’s temple down and we will swallow it in the sea.” (“St. Peter’s temple” is a reference to the Catholic church itself.)”

The videos are included at the link if you want to see them but I warn you they are vulgar and graphic beyond belief.

So what are the chances that the Democrats give back the money from this hater?

According to Federal Election Commission records, Knight personally gave a total of $60,800 to the Democratic National Committee in the 2012 election cycle, gave $5,800 to the Obama Victory Fund and has maxed out on individual donations ($5,000) to Pres. Barack Obama’s re-election campaign.

The photo (above) of a meeting between Obama, Knight and her granddaughter was taken at a Sept. 25, 2011 event in Seattle.

I am guessing, no.

After all, she just said what they all really think. (ht Weasel Zippers)