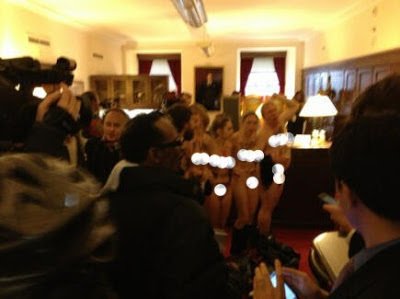 [Business Insider]A group of nude protesters barged into House Speaker John Boehner’s Washington office Tuesday afternoon, according to several reporters who were in the office at the time of the protest.

BuzzFeed reporter Chris Geidner, who was tweeting from the scene, reports that the protesters were demonstrating against budget cuts to federal funding to fight AIDS, and entered the office chanting: “Boehner, Boehner, don’t be a dick. Budget cuts will make us sick.”

According to his tweets, three female protesters have been arrested by Capitol Police for indecent exposure.