Who’s Holding the Deer Down? 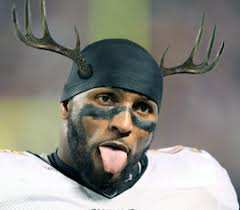 I understand lots of things. I even passed Geometry (almost.) But then there’s things I’ll just never understand such as the alleged misdeeds of Baltimore Ravens linebacker Ray Lewis using ‘Deer-Antler Velvet Extract’ to heal his injury. Never mind that he may or may not have done it in the past few years. I want to know who did it first. And how? Was it consensual? Who held the deer down?

I mean seriously, who was the first person to ingest, smoke, or shoot themselves up with deer antler extract. And beyond that, I want to know who the first dude was to believe him when he said that it made him feel pretty good and that old high school injury wasn’t hurting half so bad.