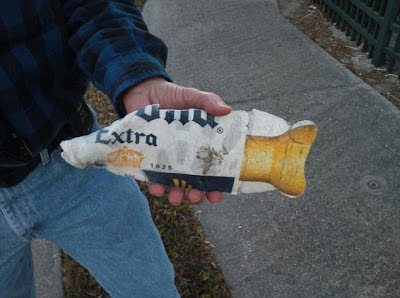 A dude’s walking down the street and blammo! Wait. Holy blammo. Perceptive dude notices that the garbage is shaped like a fish which automatically makes him think of Christianity. You know, because when I think imported Mexican beer garbage in the shape of a fish, I think of my Lord and Savior. But when he brought it home an even bigger surprise awaited him. He thought he saw the face of Jesus on the box particle.

I can’t help but wonder if he maybe drank what was in the case.

Here’s the story from The Daily Mail:

According to Fred Truluck, a devout Christian from the town of Bradenton near Sarasota, the Son of God manifested himself to him on a case of the Mexican brew.

Truck told the station WWSB that he was out walking his dog when he came across a piece of beer packaging shaped like a fish – a symbol closely associated with Christianity.

Truluck took the scrap of carton home because of the religious symbolism, but an even bigger surprise awaited him right around the corner.

‘I had it on the table, turned in over to the back, for some reason, and i said, “Wow! There is Jesus.”’
The fish-shaped section of the beer case featured a white mark which Trucluk had described as a profile picture of the Savior.

‘It’s right there,’ he insisted. ‘A kindergartner could see it.’