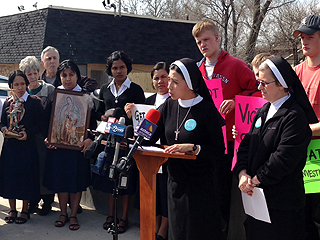 Do NOT mess with these nuns.

A huge strip club was trying to open up next to a convent. It was a standoff. And so far the nuns are winning with the help of residents.

Residents and religious of a small Chicago suburb rallied to celebrate their so far successful campaign against the opening of a multi-million dollar strip club across from a convent.

“We came together as a community, as people of faith and stood together fighting for family values against what some thought was an unbreakable giant,” Sr. Noemia Silva of the Missionary Sisters of St. Charles Borromeo, Scalabrinian said at an April 22 press conference.

“It’s not only for the sisters, but for the community itself,” she told EWTN News in a later interview.

Outrage has erupted locally over the building of the strip club, particularly because of its location next to the missionary sisters’ convent and retirement home. Proprietors of the club have been accused of breaking state law, which requires a 1,000-foot “buffer zone” between places of worship and such businesses.

“They haven’t respected state law and so we’re going to tell them, ‘You need to respect that,” Sr. Silva said. “This should not have even happened so close to a worship area.”

Although the $3 million “adult entertainment” club, “Get It,” was slated to open during Holy Week of 2012, it has yet to open its doors to the public largely due to community protest and a legal battle between the landowner and building owner.

Sr. Silva said the sisters, who are spread throughout 18 countries, have been praying for the intercession of St. Michael. “All of our communities are praying for this; it’s just constant, constant prayer.”

You can read more at EWTN.