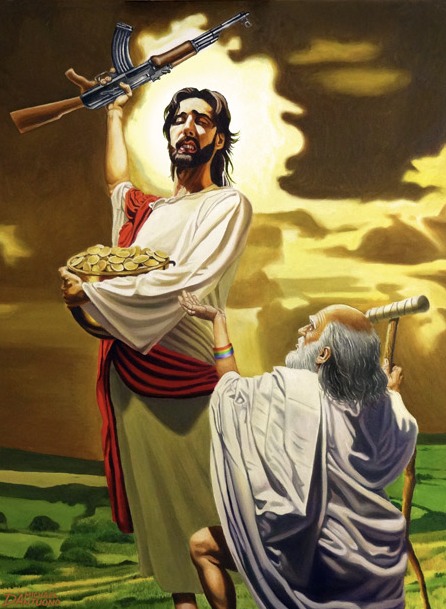 How ridiculous is this?

Artist Michael D’Antuono is certainly no stranger to controversy. His latest painting, “The Conservative Christ,” will likely frustrate conservative Christians, particularly because of how it depicts their views on issues like guns and poverty. TheBlaze spoke with D’Antuono today about his newest work to learn more about its meaning and what motivated him to create it.

In the interview he said what every artist says after they offend pretty much everyone outside their circle of friends. He said he didn’t mean to offend anyone.

It seems to me that so many people that call themselves “artists” aren’t actually all that skilled at their craft. They’re people who like being noticed. They crave fame. They’re Kardashians without the smarts.

Update: Because this blog has so infected my mind I just woke up with this thought in my head. Couldn’t that image just as well be “liberal Jesus” taking away people’s guns and money?