Anglican Priest: Archbishop of Canterbury is a W@#%er for Defending Marriage 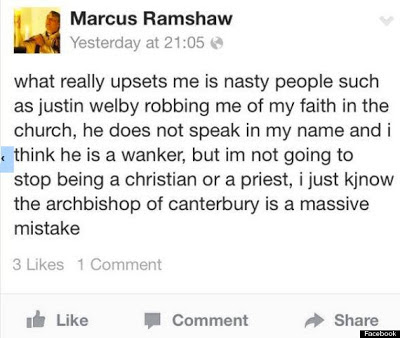 You think the National Catholic Reporter says nasty things about bishops? Well, a Church of England priest branded the Archbishop of Canterbury, Justin Welby, a “w****r” for defending traditional marriage.

After Archbishop Welby warned that same-sex marriage would effectively “abolish” the traditional institution of marriage, the “cornerstone” of society, Rev. Marcus Ramshaw tweeted out his attack on the Archbishop of Canterbury. Here it is:

Whoa.The attack seemed a little rough, especially because a few days later the Church of England dropped its opposition to the bill. Always profiles in courage with these guys, right?