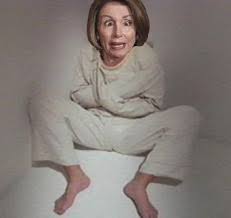 At a press conference earlier today, House minority leader Nancy Pelosi yelled and screamed that Republicans aren’t spending enough money on food stamps. “They’re taking food out of the mouths of babies,” Pelosi screeched of Republicans after the defeat of the farm bill.

You have to take a moment to really appreciate her absolute shamelessness. Just days after saying that deciding whether to kill babies was “sacred” to her, she’s now defending babies?

The babies couldn’t be reached for comment to say whether they’d prefer not getting a check from the government or being torn apart limb from limb in the womb.