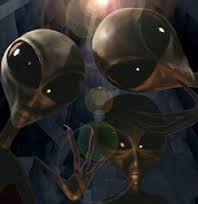 This story is enough to make one question the idea of democracies.

While we here in America get presidents who wag their finger and deny ever having had sexual relations with that women or boy/men who tweet dirty pictures and lie about it in the UK they get guys like this:

A LABOUR politician has defended his beliefs in extra-terrestrial life – after claiming to have fathered a child with an alien.

Married father-of-three Simon Parkes, who represents Stakesby on Whitby Town Council, said his wife had rowed with him after revealing he had a child called Zarka with an alien he refers to as the Cat Queen.

The 53-year-old driving instructor said he has sexual relations with the alien about four times a year.

“What will happen is that we will hold hands and I will say ‘I’m ready’ and then the technology I don’t understand will take us up to a craft orbiting the earth,” he explained.

“My wife found out about it and was very unhappy, clearly. That caused a few problems, but it is not on a human level, so I don’t see it as wrong.

Councillor Parkes, who also claims his “real mother” is a 9ft green alien with eight fingers, said people only claim he is mad because they have not shared his experiences and that the encounters don’t affect his work on behalf of Whitby residents.

I love the understatement about the wife. And who wants to bet the “Cat Queen” is a local government employee who lives in an apartment with 37 cats?

Who wants to bet he’ll be re-elected?