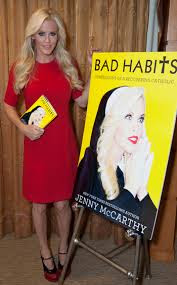 Former Playboy Playmate Jenny McCarthy has just been announced as the new host on The View, which might just be the most crazy anti-Catholic show on television.

We all know that Joy Behar may very well be an anti-Catholic bigot and Barbara Walters has castigated the Church numerous times. Things won’t get better with the addition of McCarthy.

McCarthy, raised a Catholic, has said she still thinks of herself as a Catholic but one that “broke free from the chain of the pope.” You see, it turned out that, as she described it, “The Catholic religion was making me feel a tad bit guilty for everything I was doing.”

She wrote a book called “Bad Habits: Confessions of a Recovering Catholic” which featured a picture of her in a habit.