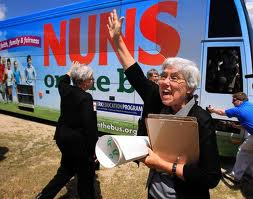 I was reading a piece about the LCWR at The National Catholic Reporter only because it was linked to by Pewsitter. It was all the usual pablun that the LCWR wasn’t happy. Are they ever?

But this line by Maureen Fiedler just jumped out at me.

One of the accusations against LCWR in the mandate was its emphasis on social justice rather than issues of sexuality or abortion. Funny thing: One might say the same thing about Pope Francis.

And Pope Francis drives around in his own little car, trying to avoid fanfare. Unlike some, who swerve towards every camera and microphone they can find.