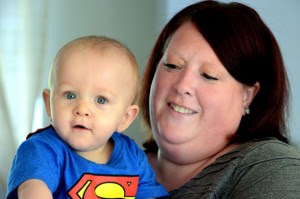 I have to wonder how often this happens that doctors advise women to abort because they’ve diagnosed the child in utero with some horrible disease which they don’t actually have. In this case, the mom believed the doctor when he said the baby was brain dead and took the abortion pill. But somehow the baby survived.

Doctors have a difficult time diagnosing brain death in adults, but somehow they’re infallible on babies in the womb?

A woman in the U.K. is suing her local hospital for urging her to abort her son, who they asserted was brain dead and missing one eye, but was born without any signs of the alleged conditions.

Sarah Hagan, 38, is suing City Hospital Sunderland now that her son Aaron is 15 months old and suffers from ailments stemming from a premature delivery following a botched abortion over an alleged condition that turned out to be non-existent.

“It breaks my heart every day when I look at my son and think how I almost got rid of him,” she told the Sunderland Echo.

After Hagan obtained a 24-week ultrasound last year, doctors told her that her child was brain dead, missing an eye, and had no chance of survival. They urged her to either take the abortion drug Mifepristone to end his life, or go to the infirmary where doctors would stop his heart and then extract him from her body. After pondering the matter overnight, Hagan followed through with her doctor’s advice and took the recommended abortion pills.

However, as time passed, Hagan realized that her child was miraculously still alive. She returned to the hospital where doctors were likewise surprised that the baby had indeed survived the abortion.

Hagan was then told that she must deliver her son right away. He was born weighing in at 1 pound, 7 ounces, and contrary to assertions, the baby was not brain dead, and had two bright blue eyes.

“Despite what they said, he was born breathing and kicking,” Hagan told reporters. “[His] brain is on par with any other baby of his age.”

And just to give you a good feeling instead of the feeling that the state of the world is going to make you vomit, here’s a picture of the baby who survived.