Methodist Church Sign: Jesus Had Two Dads and He Turned Out Just Fine 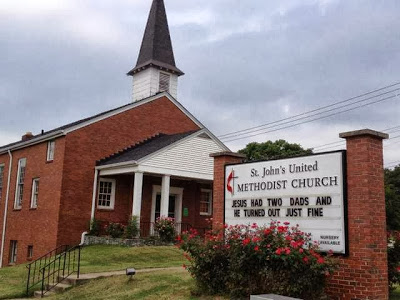 Pastor Bill Campbell of St. John’s United Methodist Church, put up a church sign saying, “Jesus Had Two Dads and He Turned Out Just Fine.” According to The Tennesean, “he didn’t expect much of a response.”

I’ll just be honest here. Can you spare me the b.s.? Please? With what’s going on in this country right now, a pastor puts that sign up and says he has no idea that it would create a stir?

Only three options are available for us to believe from this:

Look, if you’re going to put something like that up just say yeah, I wanted to create a controversy. And I did. Hey, Miley Cyrus didn’t come out the day after her twerking debacle and say she didn’t mean to create a stir. No. She did it on purpose. She made a fool of herself on purpose. And this sign is something like the religious equivalent of Miley Cyrus twerking. In a weird way.

He says he’s not making a statement about homosexuality, he’s just pointing out that we should love all kids because they don’t have a choice who their parents are. Well, you should say that then.