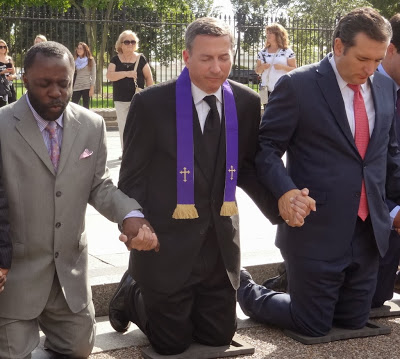 Senator Cruz joins Rev. Rob Schenck (from Faith and Action) and Rev. Frazier White (a Democrat) in prayer for Saeed Abedini, a Christian who has been held and tortured in an Iranian prison for over a year for the crime of proselytizing.

With all the showboating and carefully chosen stances going on in D.C. right now, it’s nice to see a politician going to his knees in prayer for something bigger than a budget. I wish many other elected officials would join him there and raise some attention to the plight of persecuted Christians.