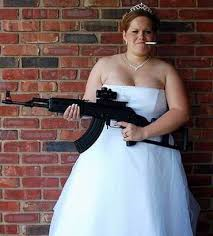 This guy is going to be on the couch for a loooooooong time.

A German couple’s marriage got off to a rocky start when the groom forgot his bride at a highway gas station on the way home from their honeymoon, only noticing she was missing after hours had passed.

Police said Friday the couple was heading home to Berlin from France when the man pulled over near the central town of Bad Hersfeld late Thursday to fill up their van.

The woman had been sleeping in the back but got up — unbeknownst to the man — to use the toilets and he drove off before she returned.

Only after 2 ½ hours on the road did he notice she was gone and called police, who said she was patiently waiting.

Let’s be clear, “patiently waiting” means she pretended to be understanding while the po po was there but let’s face it, this guy is dead. You know, normally when men go into a marriage we have a little cushion, a little room to play with so that when we get in trouble it’s not the end of the world. This guy’s cushion is all gone. And you know what happens when you don’t have a cushion, you get a real pain in the…