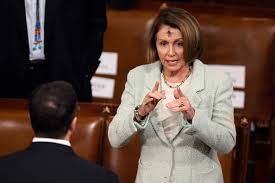 A bunch of congressmen celebrated Diwali on Capitol hill recently for the first time. Oddly, the ACLU was not protesting this event or calling for a separation of Church and state on this one. I guess if it’s not Christianity they’re ok with it.

In reporting on this story, Christian News dropped this nugget:

Legislators from across the country gathered as diyas were lit and a Hindu priest chanted Vedic mantras. Special jasmine garlands were distributed to attendees, who also were marked with the traditional red tilak on their forehead.

Among the attendees was House Minority Leader Nancy Pelosi.

“I have come here to say Happy Diwali,” she told those gathered, according to the Huffington Post. “[The] United States owes a great debt of gratitude to India. Because our civil rights movement was built on the non-violent movement in India. Martin Luther King studied there, spoke there. We are blessed not only by that legacy, but also by the presence of so many Indo-Americans in our country.”

Hey Hindus, you guys up for a trade? Us Catholics been trying to deal Pelosi for a while but sadly we haven’t found any takers. Come on. We’ll throw in Joe Biden and a Catholic to be named later, no extra charge.