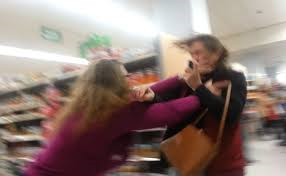 Hey, the holidays make everyone a little crazy, right? This should seriously be a Hallmark Thanksgiving special. You just have to read this.

Good for the Channel 3000 reporter for writing it up so perfectly:

Two groups of women were involved in what Madison police are calling a melee near the meat counter at a Woodman’s Food Market.

Police said a dispute over money started in the store on Gammon Road on the afternoon of Nov. 12 and led to fisticuffs when one woman pulled out pepper spray. Two women facing off with four others were sprayed with the pepper spray, according to police.

Officers said one combatant armed herself with a frozen turkey that was swung and tossed. Two women began exchanging punches. A pallet holding eight large boxes of bacon was toppled.

A 62-year-old man who was on the phone with dispatchers told police he was struck in the head with a full container of yogurt.

The two women punching each other were fighting on the floor with the spilled yogurt and bacon, according to police.

Police stopped the women who were pepper sprayed as they were about to drive away. One was cited for disorderly conduct. The other combatants were not immediately located.