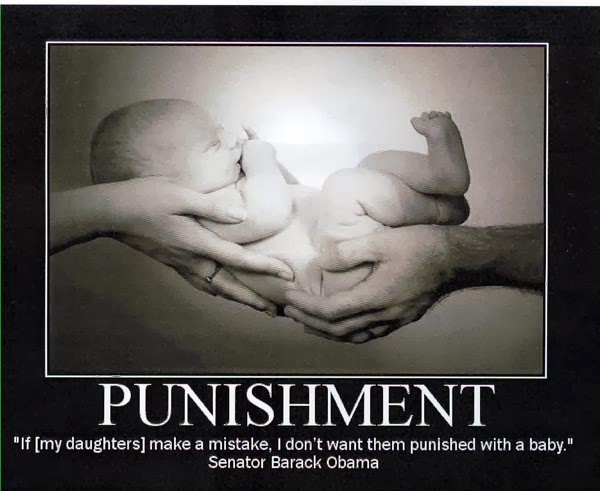 The president who doesn’t want his daughters to be punished with a baby certainly seems ok with punishing other people for having babies.

Long Islander Cornelius Kelly found it would be no problem to secure a family plan for his wife and three older kids through New York’s health-care exchange, but his 18-month-old daughter was out in the cold. The baby would need her own insurance policy.

“I couldn’t believe what I was being told,” said the dad from East Quogue, in Suffolk.

Kelly said he was no fan of the Affordable Care Act, but when he received notice a few weeks ago that his current insurance plan was being canceled, he tried the New York State of Health Web site.

Kelly, 41, and his wife, Jennifer, 42, are self-employed and have always had to buy their own insurance. Kelly runs a title insurance business in Westhampton, and his wife is a pediatrician in private practice in Miller Place. “I initially went on with a lot of optimism,” he said.

Kelly said none of the plans offered out-of-network coverage, which was something he wanted. But even worse, they only covered his three older children, who are 3, 5 and 6.

When Kelly called a representative, he was told his daughter had to be 2 before she could be covered under a family plan. He would have to buy a separate plan for her, at monthly premiums that ranged between $117.21 and $369.31. The cost would be on top of a family plan with premiums ranging from $810.84 to $2,554.71 a month.

You’d almost start thinking that this administration wasn’t all that fond of humanity.