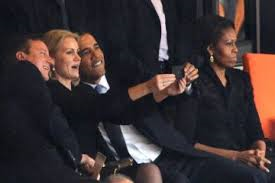 The Providence Journal reported that “a half dozen people” protested Bishop Thomas J. Tobin’s remarks about Nelson Mandela. Seriously. Half a dozen. That’s six to you and me. Six.

Dude, when I take my kids to Applebees we’re a larger number than that. Should the Providence Journal be reporting on us heading out from some chicken and fries?

All Bishop Tobin said was that while “there was much to admire” in Mandela’s “long life and public service,” there is also a part of his legacy “that is not at all praiseworthy, namely his shameful promotion of abortion.

The protestors claimed that the bishop’s remarks were “ill timed” and “uncalled for.”

Oddly, these same people did not protest the ill-timed and uncalled for selfie from the president during Mandela’s funeral, which, if you ask me, may have been a teensy bit more insulting to Mandela.

Then, of course, you had the inevitable attempt to put distance between any priest or bishop who mentions abortion and Pope Francis.

Concetta DiCenzo, of Cumberland, one of those who presented the petition Wednesday, told reporters that Pope Francis is reaching out to people, including young people who have lost their way, while, she argued, Bishop Tobin has been too concerned with a political stand.

“I mean, Nelson Mandela, he suffered,” DiCenzo said of the former president of South Africa who was imprisoned for years for his efforts to end that nation’s policy of apartheid. She added that “I am really tired of the church pushing the people away.”

Bishop Tobin reportedly responded by saying that Pope Francis “addressed the issue very clearly in his recent encyclical by writing: ‘Among the most vulnerable for whom the church wishes to care with particular love and concern are unborn children, the most defenseless and innocent among us. … It is not ‘progressive’ to try to resolve problems by eliminating a human life.’”

Something tells me the half dozen protesters will not be swayed by that little reminder.