Holy Health Class! This Poster is Actually Up in a Class for 13 Year Olds 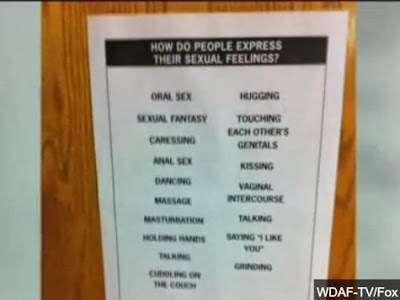 As if you needed another reason to keep your kids out of public school, this one takes the cake. This poster is part of the curriculum for health class for 11-13 year olds, according to Breitbart.

The father who reported this actually thought it was a prank at first. That’s how outlandish it is. And you know how in these kinds of stories, once the Mom or Dad finds them out, the school district might obfuscate or throw someone under the bus. But no. They’re defending it.

According to Fox News, however, district spokeswoman Leigh Anne Neal said the poster must be viewed in the context of a bigger curriculum, which she identified as abstinence-based for students in middle school.

“The poster that you reference is actually part of our middle school health and science materials, and so it is a part of our district approved curriculum,” Neal said. “However the item is meant to be part of a lesson, and so certainly as a standalone poster without the context of a teacher led discussion, I could see that there might be some cause for concern.”

Neal added that the curriculum is similar to those used by other schools around the country.

“The curriculum it is a part of, it aligns with national standards around those topics, and it’s part of our curriculum in the school district,” she said.

In fact, the curriculum, titled “Making A Difference,” is published by selectmedia.org and recommended by the U.S. Department of Health & Human Services (HHS) as a “pregnancy prevention intervention.”

As a father of a thirteen year old I would have my kid out of there so quickly. What an absolute horror. Do these people think destroying innocence is their job?