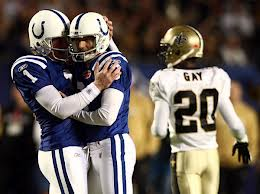 One thing bugged me about the media love affair with the idea of a gay NFL player. I was listening to Mike Francesca on 660 WFAN and he was supportive of the guy playing. Who’s not? Does anyone in their right mind want to not allow this guy to play the game?

But there are issues, aren’t there?

One thing Francesca said irked me. He said that the thought that the player would be ogling or sneaking a peak at his teammates in the shower was ridiculous.

Let me tell you something, if I was 20 years old and in a locker room/shower with dozens of female athletes there would have been mucho ogle-age, my friend. There would have been many a peak sneaked. To think that a 20 year old is going to control himself and maintain custody of the eyes is ludicrous.

Francesca said it “doesn’t work like that.” I don’t even know what that means. Then how does it work, pray tell?

I understand many people are very desirous of having an “out” player in the NFL but let’s not let ideology cloud common sense. There are some issues here that need to be dealt with. Ignoring them doesn’t help.