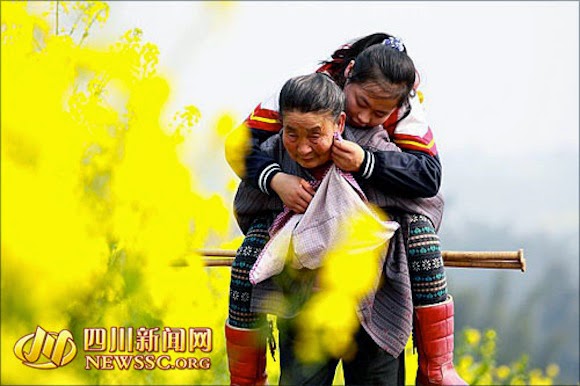 A 66 year old grandmother has carried her disabled granddaughter to school every day, according to news reports.

The child Fang Mei Qiu can not stand for more than a few minutes without being in unbearable pain due to a condition she was born with that made her kneecaps weak. The girl’s father left when she was young and her mother remarried leaving Fang Mei in the care of her grandparents.

So each morning since she was nine, Fang Mei’s grandmother puts her granddaughter on her back and begins the long one and a half hour walk to school up a mountain on dirt roads. She stops when she gets too tired and resumes again. Her granddaughter has never once been late. At the end of the day she does it all over again.

A newspaper column about her plight appeared, local authorities arranged for the family to live closer to the school. They also obtained a wheelchair for the young girl.

Her grandmother’s greatest fear is dying because she worries about who will take care of Fang Mei.