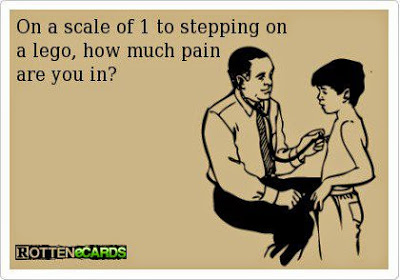 A priest in Poland is warning that LEGO’s are from Satan. I kind of agree. LEGOS are a danger. My kids play with them a lot and they get everywhere. Have you ever stepped on a LEGO? It’s bad. Now imagine stepping on a whole bunch of them barefoot in the dark. They’re like landmines for your feet. I can’t help but picture my children placing them strategically.

“OK, when the old man steps on the blue piece he’ll jump up, twist slightly to the left and his right foot will land about here…where the red piece will be waiting.”

Now, I know my kids aren’t smart enough or patient enough to actually do that but it feels like it when I’m being tortured by LEGOS.

Guys like Neil Armstrong can boast having walked on the moon but I’ve seen the “alleged” video of them walking on what they call “the moon” and it seems pretty easy and floaty and nice to me. Try walking on LEGOS and living to tell about it, Mr. Armstrong. Try that.

I just don’t understand why they don’t just make gummy LEGOS. Would it be that hard?

But it turns out that the priest’s concerns with LEGOS are a little different than mine.

In a presentation aimed at parents, Father Slawomir Kostrzewa said the popular Danish toy company had taken a lurch to the dark side with its series of Monster Fighters and Zombie mini-figures, and that they “were about darkness and the world of death”.

“Friendly fellows have been replaced by dark monsters,” he explained. “These toys can have a negative effect on children. They can destroy their souls and lead them to the dark side.”

Lego’s Monster Fighters range features Lord Vampyre, a fanged Dracula-like character, who battles the likes of Doctor Rodney Rathbone and Major Quinton Steele as they try to prevent him from “cloaking the world in darkness”.

Hey, there’s good and evil in the world. And yes, some people want to cloak the world in darkness or bring it under their thumb. Kids know that. I think it’s just adults of voting age who forget that.

While I do worry about my kids’ souls, I don’t think that Doctor Rodney Rathbone is particular dangerous, except if you step on him. That can turn you evil fast.