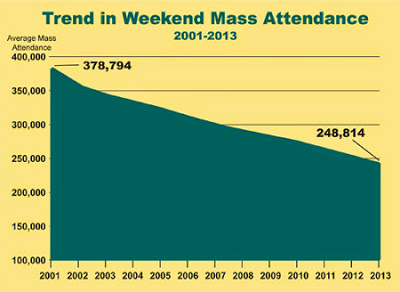 Catholic Philly has the depressing graphic about the massive decrease in the number of Catholics attending Mass in the past decade. They try to put a bit of a happy spin in that the rate of reduction has slowed. But it’s still not good. You know it’s bad when the headline is “Matt Attendance Slide Not as Bad as it Seems.”

These numbers are for Philadelphia but I’d suspect they’re pretty similar to numbers around much of the country. But to be fair, Philadelphia has had a pretty rough time these past few years.

Georgetown’s CARA Institute published a study indicating that nationwide, baptisms, marriages, and confirmations are way down. Funerals, however, have remained consistent.

Kinda’ depressing for the U.S. because I truly believe that the only thing that can save this country is a massive return to the Church. According to these stats, that doesn’t seem to be happening as of yet.