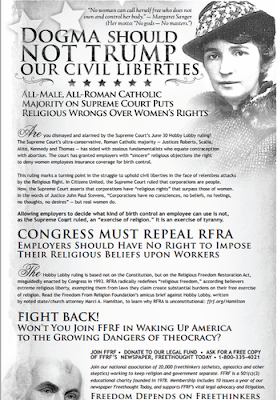 The Freedom from Religion Foundation published an anti-Catholic full page ad in the New York Times which warned that an “All-male, All-Roman Catholic Majority on Supreme Court Puts Religious Wrongs over Women’s Rights.”

Besides being hateful and pointing out that the New York Times would never publish this against Muslims or Jews, there’s also the point that the message of the ad actually makes no sense.

First they’re warning that an “all male” cabal is coming for women’s rights. Yeah, it’s those eeevil men on the Supreme Court. But wait, Justice Stephen Breyer actually sided with Sotomayor, Kagan, and Ginsburg on this issue. So it’s not that they’re male.

And it’s not that they’re Roman Catholic because Sonia Sotomayor is also a Catholic on the bench and she ruled against religious freedom in the Hobby Lobby case.

What they actually mean here is, “You’re standing against what we want so you must be destroyed.” That’s it. Those who stand for religious freedom are bad, according to these guys. That’s what they mean. So they attack.

Also kinda’ telling that the picture on top of the ad features eugenicist Margaret Sanger.