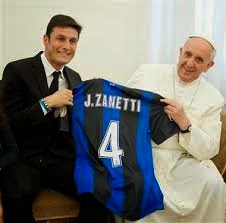 Where do you stand?

I’m thinking Pope Benedict’s team will put some old school learnin’ on Pope Francis’ teams that probably pass waaaay too much and don’t worry as much about winning as making sure everyone has their fair share of touches.

God probably doesn’t care who wins but maybe they do.

I wonder if there might be some heckling going on at the Vatican tonight? Something to think about.