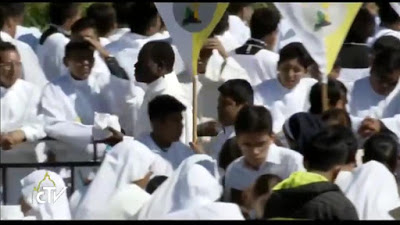 Before anyone jumps to conclusions, this is not about Pope Francis but the horrible practice of distributing communion to a million people at these giant Papal Masses.

This practice has gone on for a while now under several papacies and it must stop. We saw at the Pope’s mass in the Philippines, the Holy Eucharist being passed around like potato chips person to person from the EMHCs.

It is simply not feasible to distribute communion to that many people in such a setting.  The risk of sacrilege is “too damn high!”

Time to end this practice.